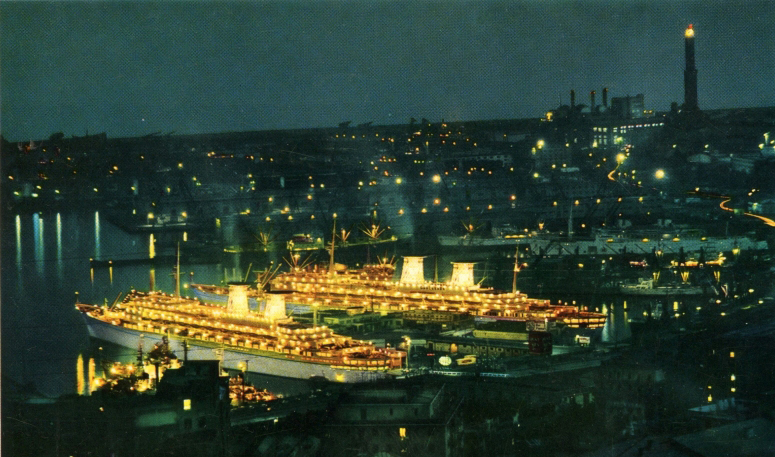 !This site is under construction!
While the work is in progress, you can visit a copy of the old version of the site at the address below:

Welcome aboard T/liner Michelangelo website.
This site has been dedicated to two Italian superliners, SS Michelangelo and SS Raffaello, who served in the North-Atlantic route from 1965 to 1975. These ships were probably two of the most beautiful ships ever constructed, and also two of the saddest liners, for apart from the French liner Normandie that only served for four years, few liners have ever suffered such an undeserving fate.
They were not as fast as United States Line’s speed-champion United States or suffer such a terrifying fate as the Titanic, but they were splendid and modern as no other Atlantic liner had been. So this site is here to give these ships some of the recognition they rightfully deserve.
Admired and envied by all the world, they were the most modern and fine couple of sister ships built after the second war. Their lounges were furnished with pictures and sculptures by famous contemporary artists and the design of the lounges was assigned to the more famous Italian architects.
During their activity service, they were at the centre of Italian chronicles, their interiors where often showed on TV, they were the Italian symbol in the world of the last naval technology… but after their dishonorable failure, exclusively because of their very bad administration, these ships have been completely forgotten, ignobly, as if they never had existed.
Another reason for the existence of this site is the fact that there are very few sites that tell anything about the Michelangelo or Raffaello, and in most cases the information provided were really limited. We have felt that such magnificent ships deserve to have a large-scale website dedicated only to them. Many people have been extremely helpful in this, but since it would not be sufficient to thank them here, they are all given the credit they deserve in the acknowledgments section of the site.

All the images contained on this site are can be freely used, it is only required to specify the source of the photo, displaying the link to this site. It is not allowed to add any kind of logo or others personalized writings on the images.

If you found here images which you detain the lawful copyright of, please contact us and we will remove the photos or as otherwise by according.