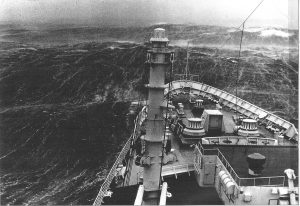 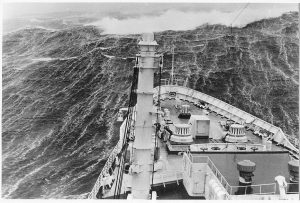 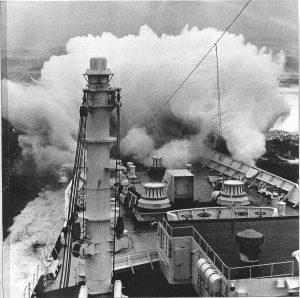 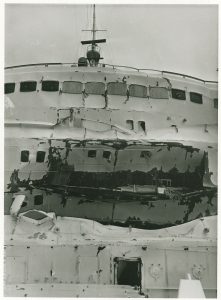 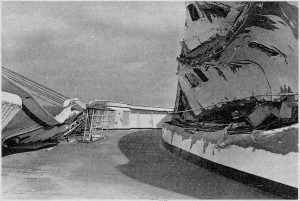 It was the morning of the April 12, 1966. Michelangelo was steaming towards New York with 745 passengers aboard, when at 10:00 am she encountered some very bad weather. Waves 20 meters high hit the ship again and again, when near the 10 A.M. one abnormal wave came up in front of the ship, just in the more unfavourable moment for to be faced.
That morning, Captain Giuseppe Soletti (who made his last crossing as the captain of the Michelangelo!) gave instructions for all passengers to stay in their cabins, and ordered the ship to take a more southern route then usual, to avoid the center of the storm. There were many important people onboard the ship on that crossing, including the German writer Gunter Grass and his wife, as well as admiral Giurati, the president of Italia Navigazione.
Claudio Suttora, the 1st official of the ship at the time, tells about the accident:
“The waves got always more high and violent… and just at the end of one great pitch that wave come up in front of us. The ship, that until that moment could ascend the waves, threaded the prow into that insuperable and frightening wall of water… nobody of us realized what was for happen… that wave appeared ahead of us suddenly… luckily the impact wasn’t so strong to damage also the rudder, so we was able to direct soon the ship against the sea”.
Claudio Cosulich, the ship’s vice captain, who was to become the last captain of the ship recollect:
“When the wave arrived, I was not on the wheel bridge. One previously wave had uncovered one air intake on the prow deck, so I took with me 4 voluntary crew members and went to repair it, to avoid that water entered. The Captain inverted the route directing the prow in the direction opposite the waves, in order to facilitate our work and protect us. We had just finished, we was descending one ladder under one deck… all us dropped ruinously… It was as fully take in one 305 mm cannon shot”
The wave climbed up over the prow about 18 meters high and tore into the forward superstructures of the ship, more than 70 meters away from the head of the prow, tearing a great hole into the superstructure. Even several 2 cm think windows on the bridge were smashed, over 25 meters above normal
sea level.
Two passengers, of which cabins were in the part struck by the wave, were killed immediately. One crewmember died few hours later and more than fifty people were injured, ten of them gravely. Amongst the injured was Claudio Cosulich, the ship’s vice captain, who reported one series of fractures to his left arm.
Soon after the incident the Michelangelo was rendezvoused by a US military vessel, that offered additional medical assistance, while the doctors of Michelangelo worked non stop until the arrival in New York.
Michelangelo limped into New York, where temporary repairs were made, and the damaged parts of the ship were covered with canvas. Upon arriving in Italy the ship was more properly repaired and strengthened, REPLACING THE ALUMINIUM ALLOY SHEETS which composed the frontal part, with steel sheets. After this, she was soon back in service and the same work was made on Raffaello. In fact, aluminium was used for build the superstructures on several modern ships in the ’60s, in order to reduce the total weight and the fuel consumption. So after the accident of Michelangelo, also other liners as France and United States had the forward superstructures strengthened by steel.
This was the only serious accident ever to take place on the Michelangelo, since her repair were very well done: she and her twin Raffaello later survived a similar storm without any damage.

Article from the magazine of the Italian Line, talking about the reports by passengers about the exemplary behaviour of the crew of the Michelangelo. (Image from Giancarlo Criscuolo, Naples – Italy)

The article is unfortunately only in Italian language.
At the moment I have not time for translate it.
If someone is willing to do it, please contact me.