Giuseppe Fariello from Naples has kindly sent us the rare images of the damaged prow of Raffaello, after the collision with the Norwegian tanker Cuyahoga in Algeciras Bay, in Spain, on 19 May 1970.
The photos were taken by his grandparents, Giuseppe (homonymous) and Anna Fariello, unfortunately since passed away, who were travelling onboard the ship on that crossing.
Giuseppe and Anna Fariello leaved from Naples for participate to the wedding ceremony of a relative who lived in the U.S.A.
During those days sightseeing travels to America were still an exceptional event, especially if by sea and on in the 2nd class of the last Italian flagship. They were escorted to the port by Mr. Francesco Fariello (their son) and a group of relatives, to greet his parents before the great journey. Arriving at the port they had also had the chance to board the Raffaello and take some group photos.
Unfortunately we have no detailed account of the dynamics of the accident. We know that it happened at night, and Mr. & Mrs. Fariello said that the impact was very strong, felt in their cabin,  located in the anterior part of the ship.
A part from the misadventure of the accident, Mr. and Mrs. Fariello preserved wonderful and intense memories of that ship, their entire lifetime. In particular, Giuseppe Fariello used to often tell his nephew Giuseppe (who sent us the images) “…It has a very very long prow, it seems never ending…”
One unusual “gift” from that trip was a fragment of the hull of the Raffaello, given to them by the workers who were repairing the prow, and taken home as a curious souvenir by Mr. Giuseppe Fariello.
The fragment of steel sheet measures approximately 5,5 x 7,5 cm. It is 19 mm thick and more than half kilo in weight.
So going forward a few year later, this one small piece of Raffaello has become a curious souvenir in one piece of Italian history.

These are the images from that travel. (click on images to enlarge)

The piece of hull, measuring approximately 5,5 x 7,5 cm, 19 mm thick and more than half kilo in weight 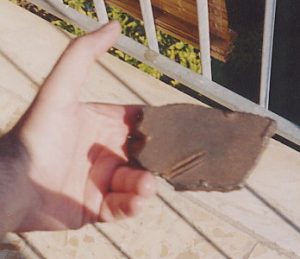 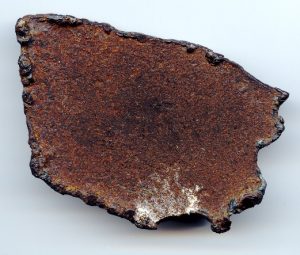 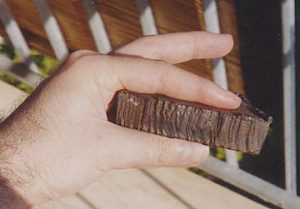